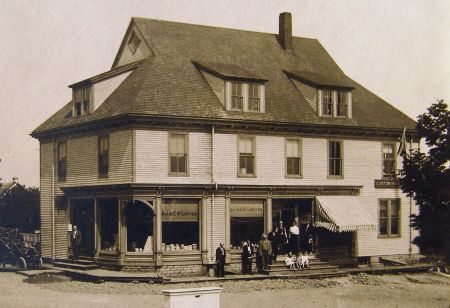 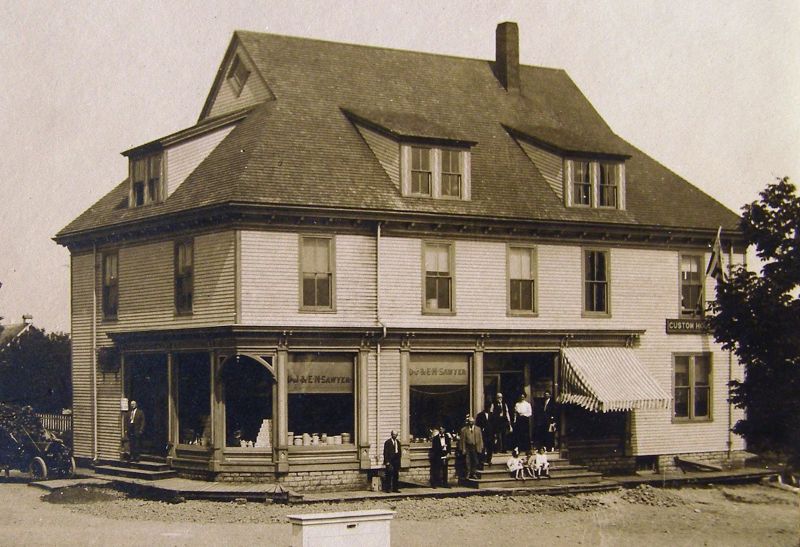 Historic photo of the Sawyer Building in Sawyer Square 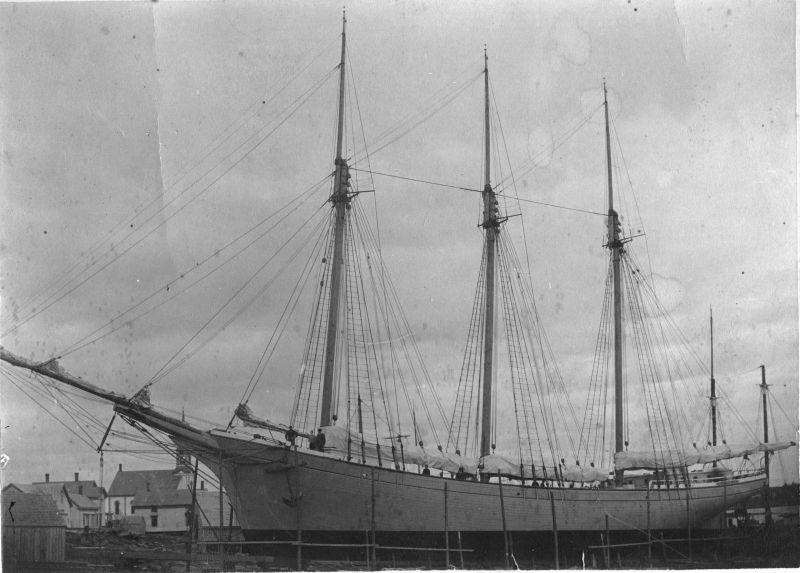 Daniel James Sawyer and his brother Edward Mansfield Sawyer owned 43 wooden vessels during their 16-year business. In 1890 they built and launched their last schooner, the "D.J. Sawyer", pictured here. 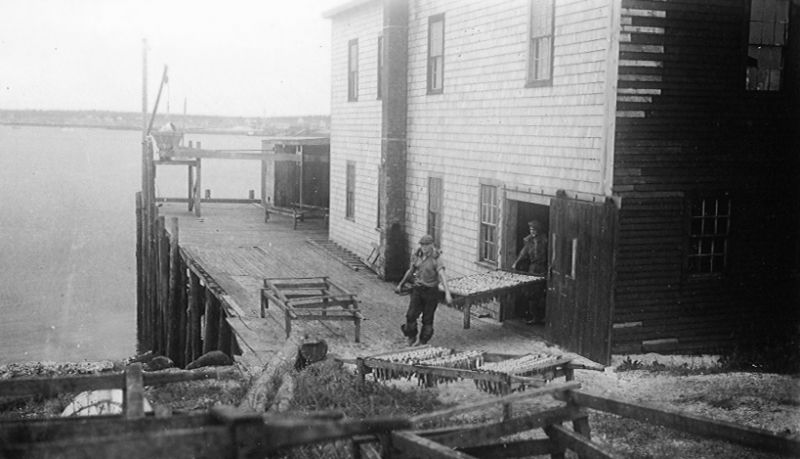 Workers carrying herring to the smokehouse at the Jonesport Packing Factory. The building with its tall smokestack is still standing. 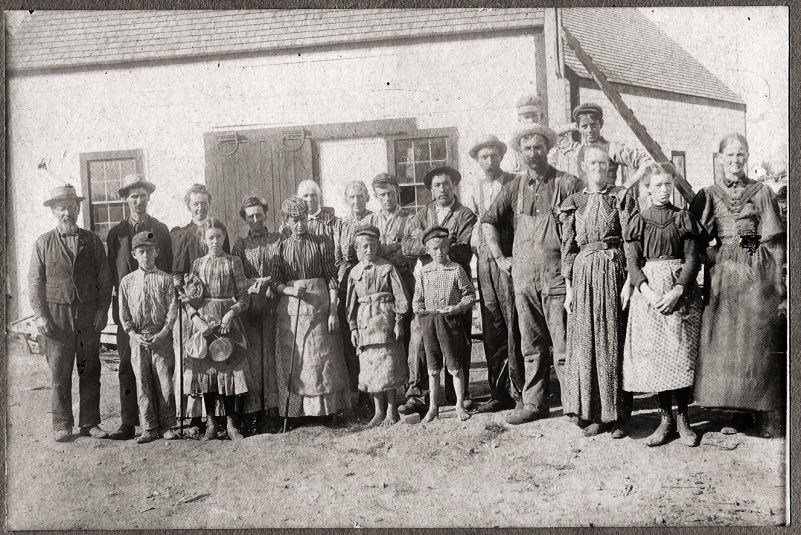 A crew at a Jonesport stringing shed in the late 1800s. The sticks being held by two of the workers were used to string herring for drying. 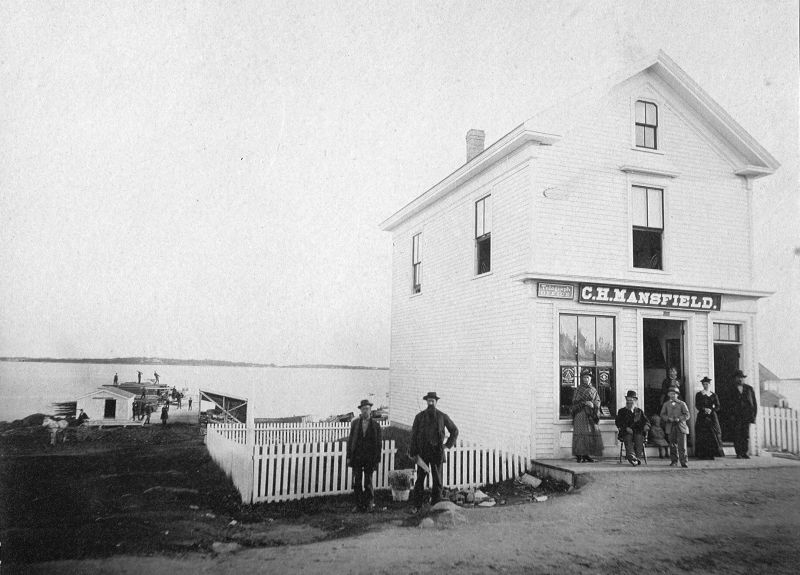 In 1881 Charles H. Mansfield owned and operated a general store and ship’s chandlery on Sawyer Square. The Harbor House occupied the extended building as a B&B from 1997 until the early 2010s. 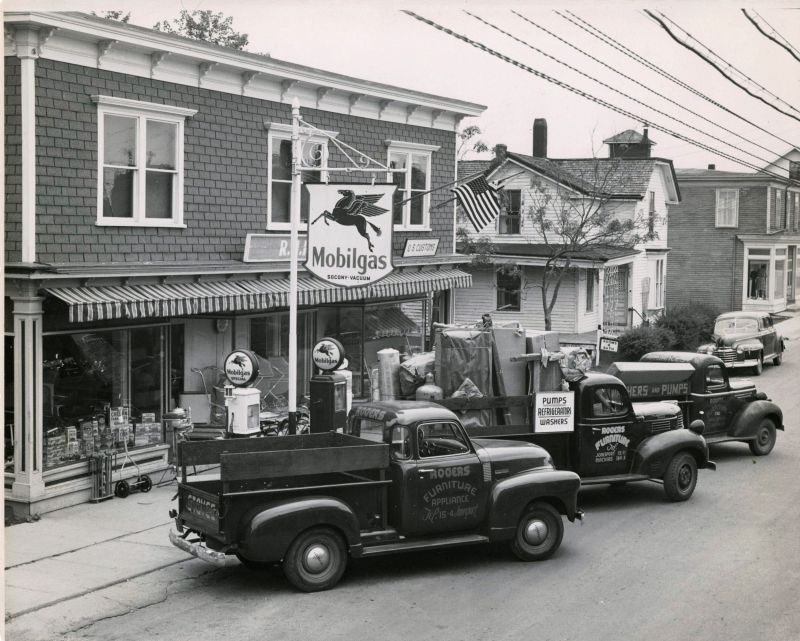 The R.H. Rogers Store was located on Main Street. The building was lost to a fire in 1986. What is now Hamilton Marine was rebuilt on the site. 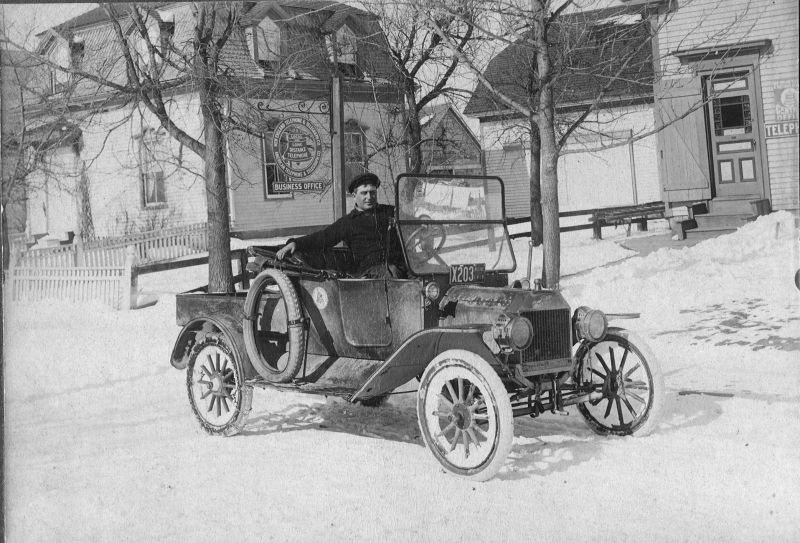 This is a photo of the Laura Wilson house on Main Street in 1916 when it was the central office of the New England Telephone & Telegraph Co. 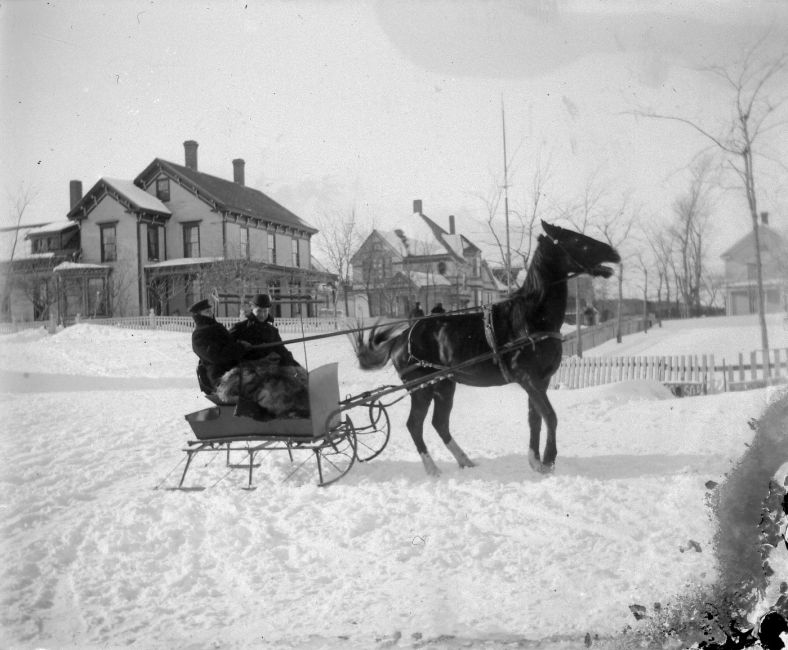 This photo was taken on Sawyer Square. 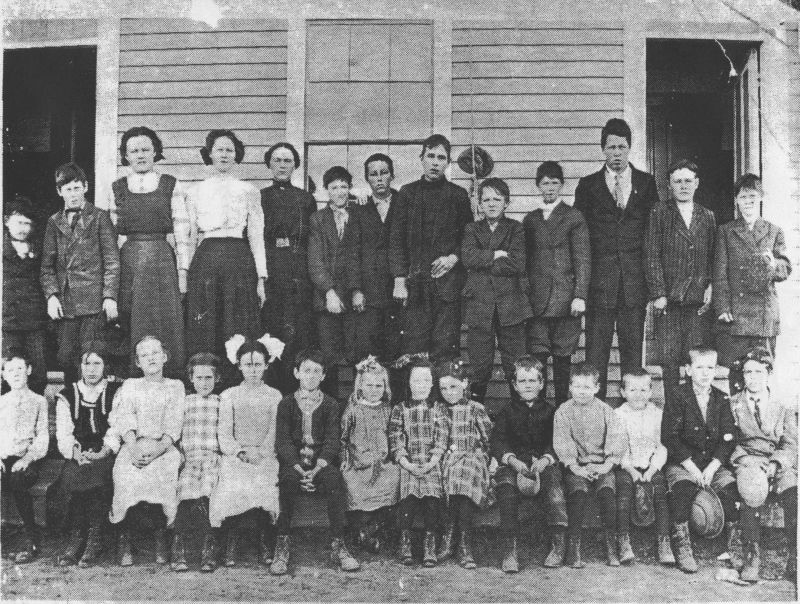 This photo of the Upper Bay School students was taken about 1910. The Mason Bay Fire Station is located on this lot today. 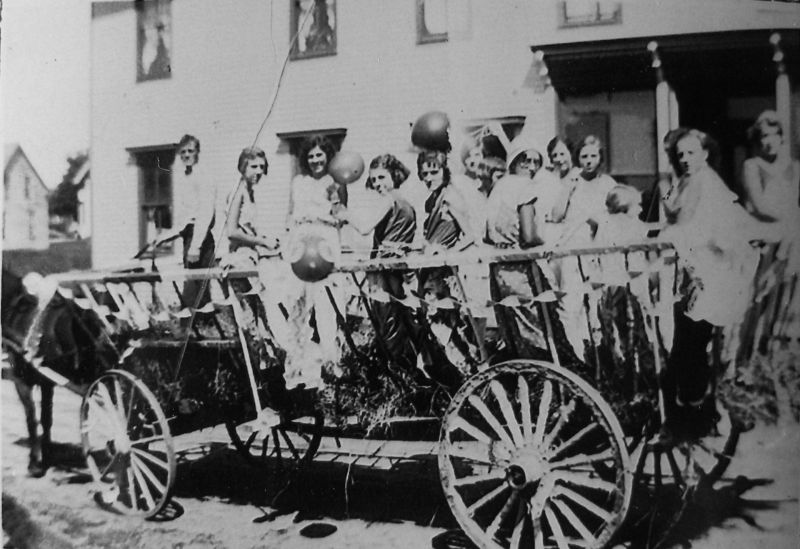 In 1932 the Town of Jonesport celebrated its 100th birthday. This is one of the floats that was in the centennial parade.

Before the arrival of early settlers, Native Americans, probably a part of the Passamaquoddy Tribe, inhabited Jonesport.  Their acts were friendly towards their white neighbors, yet the early settlers always stood in fear of them.  Loon Point, Cross Cove, and many other places were their frequent camping grounds.  Cross Cove was so named because of a cross erected there by the Indians.  The Reach, then spelled “Mooskey,” now Moose-a-bec, is derived from an Indian name.

Jonesport, previous to its incorporation, was a part of the town of Jonesboro, which was granted a charter January 1, 1789. Previous to this it was known as Plantation Number twenty-two. The present town of Jonesport was incorporated as a town by Act of the Legislature, February 3, 1832.

The Commonwealth of Massachusetts, January 1, 1789, granted the land through this section to John C. Jones. He is said to have received this gift in payment for a sloop of his, which was lost in the siege of the British at Castine, Maine.  The grant comprised the districts of Bucks Harbor, Machiasport, Jonesboro, Jonesport, and Roque Bluffs - a total of 487,160 acres.  This tract of land, plantation number 22, was incorporated as a Township on March 4, 1809 and was the 176th town in the Province of Maine.

After the turn of the century, Jonesport was a booming Town with several Sardine canning factories, a busy port, a thriving business section and all the amenities a person could ask for.

For several decades Jonesport was the busiest hub of activity along the nearby coast. But then, as often happens, the sardine fishing in the area began to decline. Even with lobster fishing rising to take its place, Jonesport's commercial fishing industries slowly moved to other ports. Even so, Jonesport remained a thriving town for many more decades.

Today, Main Street is constantly evolving to suit local needs and cottage industries thrive due to a strong spirit of entrepreneurship in the area.

Among the first non-natives to settle in the town were people whose names live on in our Town. Thomas Kelley, who came here in 1773 settled on Kelley’s Point, Francis Cummings, who came here from Damariscotta, Maine in 1775, and Manwarren Beal came here about the same date from Old York, Maine and settled Barney’s Point, Beals.  John Sawyer with his wife Mary Jordan Sawyer and nine children, came from Limmington, Maine in 1775 and settled near Sawyer’s Cove.  Thomas Cromwell and his wife came here from Salem about the same date and settled on Loon Point. Elihu Norton, another early settler came here in 1790 and made his home at West Jonesport.  He was very friendly with the Native Americans and was a noted moose hunter.  He had several moose snares at a creek on the Indian River road, and so that area is now known as Snare Creek.  Other early settlers were Thomas Hicks who lived on Old House Point and John Buffitt who was the first settler in town to receive a grant of land from the proprietor of this section, John C. Jones.

At an early date the business section of the town was at the Indian River. There was a large sawmill, shipyard, and the end of the mail route. Daniel James Sawyer was the most extensive ship builder and owner in the town.  He built many vessels that sailed to every port in the country. The largest one ever built was completed in 1890 and named the D. J. Sawyer and commanded by Captain Oscar W. Look.

The first tavern was kept in the Moose-a-bec House owned by Capt. Edward A. Mansfield and was located on Sawyer’s Square.  The second hotel was built in 1860 by William Rumery and was located on what is currently Ferry Street. This hotel burned in 1872.  E. L. Plummer erected the Bay View Hotel in 1879. It later burned as well.  The first mercantile store was kept by Clement Hopkins and Elias Hinkley and the first Postmaster in town was Edward A. Mansfield.  The Post Office at West Jonesport was established in 1883 with J. B. Clark as its first Postmaster.  Jonesport’s first permanent physician was Dr. Edgar MacNichol who began his work here in 1869. The first church was built in 1860 and was called the Union Church. The first schoolhouse was built on the Indian River Road and the second one stood at Sawyer’s Cove. The High School was established in 1894 and a building was erected in conjunction with the Masonic Lodge and located across from the Post Office Building.  In 1905 the town of Jonesport was divided into ten school districts, with a total of 16 common schools of lower grade, and one high school. Commercial fishing soon made Jonesport a Town to envy along the Downeast coastline.

Currently, Jonesport is in the process of reinventing itself. Commercial lobster fishing, harvesting of clams, quahogs, urchins and periwinkles, and other ocean-related businesses dominate its economy and will continue to be a vital part of Jonesport's identity. Other avenues of diversification are being examined as Jonesport begins to open itself up to the possibilities offered in global marketing. With so much to offer, and yet such a strong identity to protect, Jonesport is guaranteed to continue being a unique and bountiful place along Maine's Bold Coast.

Jonesport – a town for whom the sea is life

How the seafaring trades shaped the town's history.